Filipino Canadian actor Alex Mallari Jr. may look tough and deadly as Christos, Ryan Reynold’s nemesis in Netflix’s star-studded sci-fi actioner “The Adam Project.” But all that menace, we quickly found out in a recent roundtable interview, is just part of the job that Alex does so well.

When we spoke to the 34-year-old actor, who moved with his paternal grandmother—who he fondly calls “Inang”—at age 4 from Lubao, Pampanga to Toronto, he attributed his good natured personality and friendly demeanor to his Pinoy and Canadian roots.

“I am very different from Christos, who’s an asshole. I am not,” Alex quipped, laughing, when asked how different he is from his mean character.

“I tend to think that I’m very kind—for two reasons: One, I’m Filipino and, two, I’m Canadian. I think those are the two kindest things any person can be in this world. And unlike Christos, I don’t hate Ryan, who’s an awesome individual and a wonderful friend.”

Alex is really no stranger to acting. Aside from his career-boosting role in the Syfy series “Dark Matter,” he has also appeared in “Shadow Hunters,” “Designated Survivor,” “Nikita,” “Beauty and the Beast,” “Workin’ Moms” and “Coroner.” He also portrays a recurring character as a police investigator in the Netflix series, “Ginny & Georgia.”

While that may be a pretty impressive body of work, that doesn’t make him less thrilled and appreciative of getting “The Adam Project” gig.

“Perhaps the most challenging part about getting this role was wrapping my mind around the fact that I was going to be in a movie directed by Shawn Levy with superstars Ryan Reynolds, Jennifer Garner, Mark Ruffalo and Catherine Keener,” he said. “I was walking with these giants! But when it came down to it, it was time to put my head down and start working—and it came so naturally. I feel like everyone on set had such an awesome energy.”

Asked if he could speak Filipino, Alex answered, “A little bit… my Tagalog’s OK. I was born in Lubao, so my family is Kapampangan and some other dialects, so I get things confused. But one thing’s for sure: I can tell when I’m in trouble, especially when my parents are pissed with me (laughs).”

For his participation in “The Adam Project,” Alex said he had to give up another coveted project.

“I was on the set of ‘Workin’ Moms’ as we were filming our fourth season,” he recalled. “Then, my managers got in touch with me—first, about an offer for the movie ‘Resident Evil.’ Shortly after that, they called me again in the afternoon and said, ‘OK, here’s the thing. You also got ‘The Adam Project.’ Which movie do you want to do?’

“I couldn’t do both of them because there was one day [in the shooting schedule] they couldn’t work out. So, as much as I love ‘Resident Evil,’ because I’m such a fan of that franchise, the opportunity of working with Ryan, Shawn and Zoe was just something I couldn’t say no to. Shortly after speaking to Shawn about getting the role, I got on the phone with our stunt and fight coordinator Jim Churchman, and the ball rolled quickly from then on.” 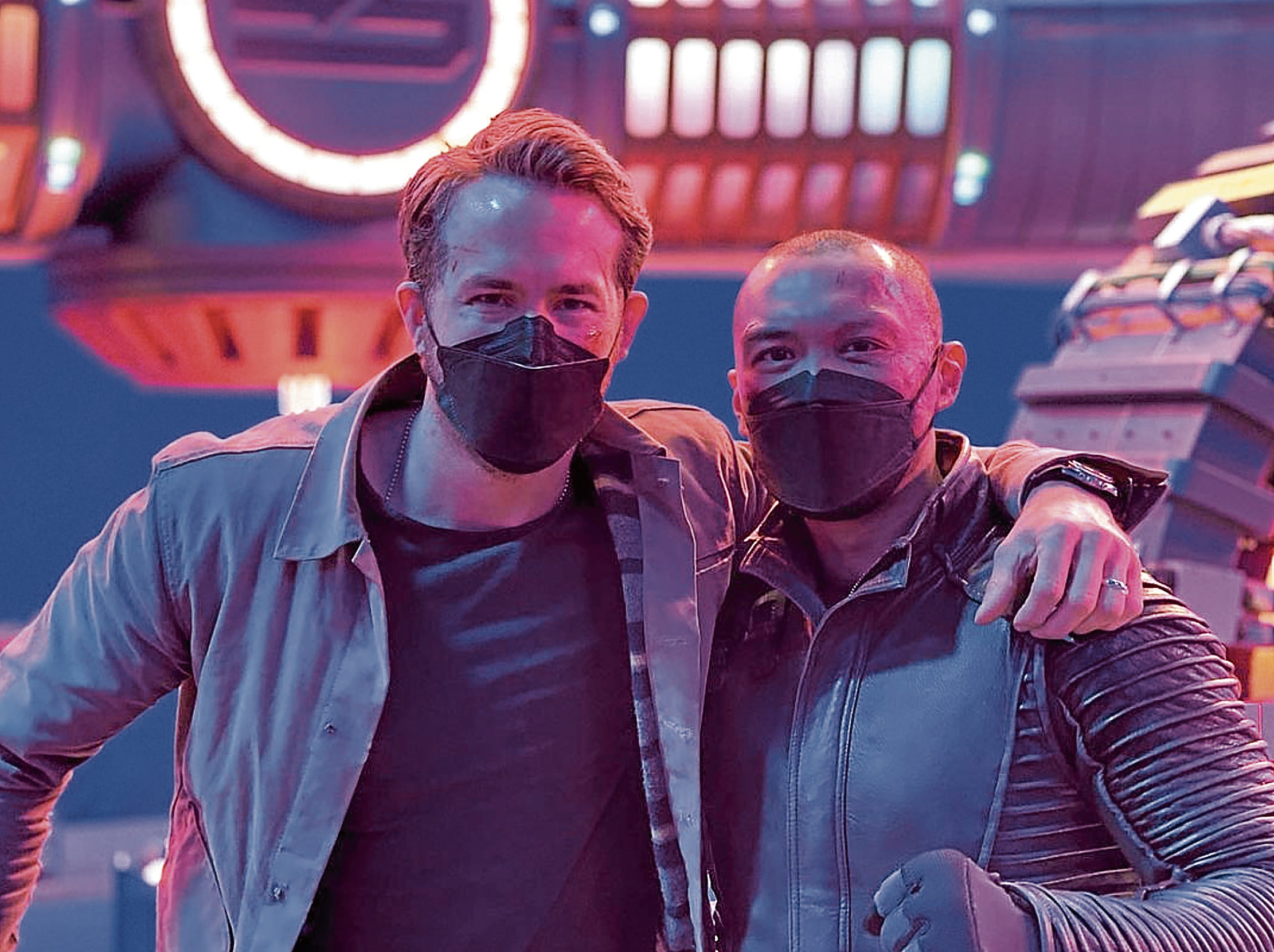 Mallari (right) on the set with Reynolds

While Alex wanted to follow everything that was expected of him as an actor, he did try to incorporate some Pinoy flavor into his action scenes.

“As far as improvs are concerned, I was at a place where I didn’t know if I was allowed to do that, because you’re working with [seasoned actors],” Alex shared. “Maybe it’s a Filipino thing, where I just want to be respectful to my elders. So for me, it was like, ‘I will work under the your conditions, and let me just compensate with that because I’m grateful to be here’—so I didn’t really improvise any lines.

“In terms of preparation, the moment I found out about it, I followed a very strict diet because you’re working beside Ryan Reynolds (laughs). I worked out a lot, did taekwondo, which is something I’m proficient at, and boxing as well.

“However, there was a specific thing that I did ask for. In the movie, you guys see the two sticks that I pull out that wasn’t originally there to begin with. Jim called me and asked if I was proficient at any weapon, and I said there was a series [‘Dark Matter’] that I did where I really got to spend a lot of time with a katana, so I was really good with that.

“But I really wanted to do something for the Philippines, so I said, ‘Listen, can we do arnis sticks or Kali knife? Jim said, ‘That sounds good.’ I said, ‘I don’t know what I’m doing, though, so you guys have to teach me.’

“It was nice that they were so accepting of my need to represent the Philippines at some capacity. We’ve only shown a few [arnis] moves, but I’m so happy that it made the movie at all!”

We also asked Alex to describe his journey as an actor in Hollywood. Are opportunities for people of color improving?

“They’re certainly improving,” said Alex. “There was a time when we were able to say that Hollywood wasn’t doing a good job at bringing inclusiveness into the picture. Not anymore. Now, I don’t think we can say that Hollywood is doing a bad job.

“My journey as an actor has been fun, and there have been a lot of learning opportunities. Filipinos aren’t really recognized that much. I don’t have the look of the typical Asian they want, and very rarely do you see Filipino characters in a breakdown—until recently, which is great. A breakdown is when you get an audition, and it lists down the different characters they want. I’m starting to see more and more of these opportunities nowadays.

“Up until then, a lot of the roles that I’ve gone out for are open ethnicity. But I do feel there needs to be, not just more Filipino actors, but more Filipino writers, publicists and directors. I just worked with an awesome Filipino director of photography, and it was so nice to just have our community there. So, yeah, things are opening up, and it feels good knowing that, no matter how small, I’m helping open doors for future generations—because they’re the ones who really matter.”

If you could go back in time to write some wrongs, which period in your life would you go back to?

“Oh, man. If I could, I would hold on to being able to speak Filipino so that I could have nourished my relationship with my ‘Inang’ even more—because she was my world,” Alex admitted. “There came a point where we moved to Canada, and I was so adamant to speak English, because I didn’t want to feel left out, that I lost my ability to speak Kapampangan.

“It didn’t really put a big wedge between my Inang and me, because we spent every day together, and I love her. She would spent some time in the Philippines, then she’d spend some time in San Francisco than with us over here—and I cherish every moment of that. But there came a point where communicating became difficult. But we did our best. That’s the wrong that I would right, for sure.”

The hottest entertainment news straight to your inbox

Don’t miss out on the latest news and information.